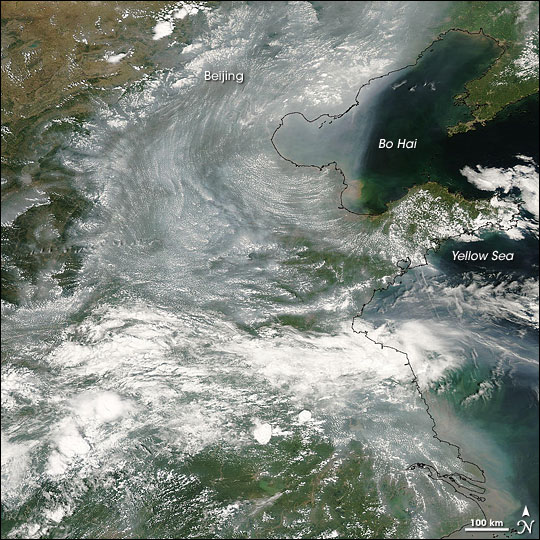 In anticipation of the Olympics and Paralympics in August and September 2008, officials in China implemented pollution-reducing procedures beginning on July 20, 2008. A week later, the government-run China Daily newspaper announced further measures that might be taken, including removing 90 percent of privately owned vehicles from roadways, halting all construction in the region, and temporarily closing additional factories.

On July 26, 2008, the Moderate Resolution Imaging Spectroradiometer (MODIS) on NASA’s Aqua satellite took this picture of eastern China. This image shows a thick band of haze snaking through the region, largely hugging the coastal lowlands along Bo Hai and the Yellow Sea. The haze mixes with clouds, and an especially thick band of clouds occurs just west of the Yellow Sea. South of this, the brown-green color along the coast results from sediments in the water, although some haze likely occurs directly overhead. In the mountainous region to the west, skies are relatively clear.

Amid heavy haze came some recognition of China’s progress toward sustainability. An article published in Nature on July 24, 2008, discussed China’s energy and sustainability challenges, and stated, “An oft-cited statistic is that the Chinese bring a new power plant on line every week or two; less appreciated is that today’s power plants generally employ state-of-the-art combustion technology, whereas older, less-efficient plants are being shut down.”