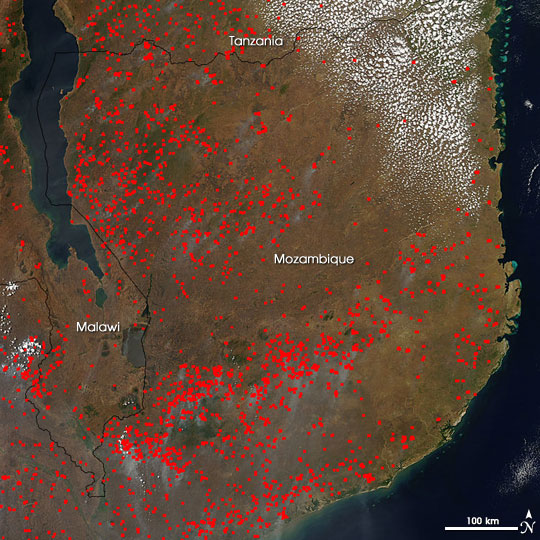 As the dry season matures in southeastern Africa in late September, agricultural burning becomes more widespread across Tanzania and Mozambique. This image of the region was captured by the Moderate Resolution Imaging Spectroradiometer (MODIS) on NASA’s Aqua satellite on September 23, 2007. Places where MODIS detected active fires are marked in red. In the savannas and grasslands of Africa, thousands of fires are set each dry season to clear brush from cropland and pasture, to move game, and to burn the stubble from already harvested fields. Although it is not necessarily immediately hazardous, such large-scale burning can have a strong impact on weather, climate, human health, and natural resources.

The large image provided above has a spatial resolution (level of detail) of 250 meters per pixel. The MODIS Rapid Response Team provides twice-daily images of the region in additional resolutions.