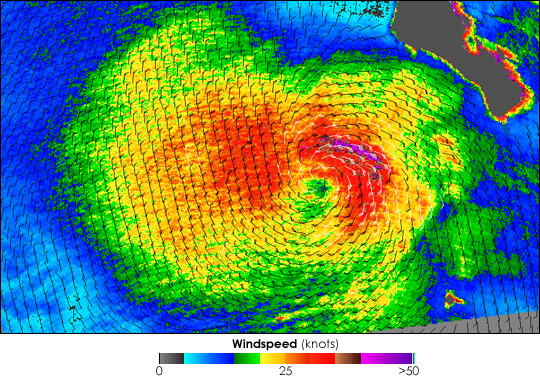 Tropical Storm Dalila was already starting to fade on July 26, 2007, when the QuikSCAT satellite captured this image. The image shows wind speed in color and wind direction with barbs. The white barbs point to areas of intense rain. Dalila was never a big storm and was just declining from its peak when the data used to create this image were captured. High wind speeds—red and purple—are north of the calm region, represented by a green spot, that marks the center of the storm. In a well-organized storm, high winds circle a calm eye like a bull’s eye. Though the wind direction circles the center in neat bands, the storm itself is spread in a horizontal oval instead of a symmetrical circle.

Tropical Storm Dalila was the eighth tropical system to form in the East Pacific during the 2007 season, and the fourth named storm. Dalila formed south of Baja California and arced northwest over cooler waters as it degraded. At the time this image was taken, the storm’s winds blew at 74-83 kilometers per hour (40-45 knots or 46-52 miles per hour) said UNISYS Weather.