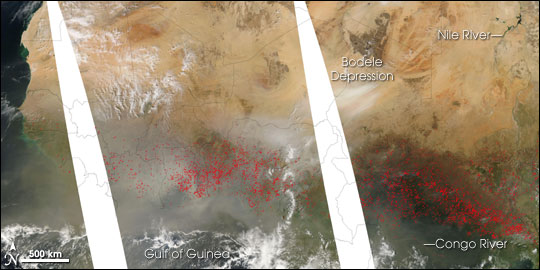 In northern Africa south of the Sahara Desert, the landscape transitions into a sparse, semi-arid savanna known as the Sahel, and then into more humid savannas farther south. Across the region, extensive agricultural-related burning takes place each year for several months during the Northern Hemisphere fall and winter. People set thousands of fires to clear brush, burn off crop stubble, and renew pasture grasses.

This image from the Moderate Resolution Imaging Spectroradiometer (MODIS) on NASA’s Aqua satellite shows a view of northern Africa captured in successive satellite overpasses of the area over several hours on January 8, 2007. Aqua observes the Earth from east to west, so the right-hand part of the image was captured first. The white stripes show gaps between overpasses. Hundreds, possibly thousands, of active fires (marked in red) were detected by MODIS across a broad area. North of the Gulf of Guinea, the landscape is blurred by a dust cloud driven into the area in previous days from the Bodele Depression to the northeast. A bright swath of dust in the scene indicates another dust storm is brewing in the depression.

People have been using fire to manage landscapes in Africa for thousands of years. While such burning is not necessarily immediately hazardous, it can have a strong impact on weather, climate, human health, and natural resources.

The large image provided above has a spatial resolution (level of detail) of 1 kilometer per pixel. The MODIS Rapid Response Team provides twice-daily subset images of northern Africa in additional resolutions via a clickable map.