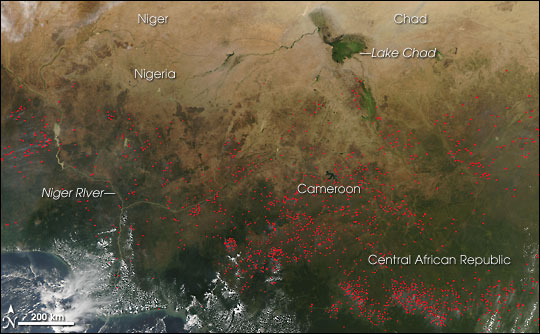 The agricultural fire season was underway in northern Africa in late November 2006. Each year around this time, farmers and people who raise livestock set fires across the region to clear dead vegetation and return its nutrients to the soil, preparing farmland for the next season’s crops and preparing grazing lands for new growth of pasture grasses. This photo-like image from the Moderate Resolution Imaging Spectroradiometer (MODIS) on NASA’s Aqua satellite on November 27 shows scores of active fires (marked in red) burning across several countries of north-central Africa: (clockwise from top left) Niger, Chad, Central African Republic, Cameroon, and Nigeria. Although these fires are not necessarily immediately hazardous, such large-scale burning can have a strong impact on weather, climate, human health, and natural resources.

The image also illustrates the transition of vegetation from the Sahel—a semi-arid, sparse savanna landscape that extends roughly across the latitude belt of Lake Chad—to the much wetter, and more lush savannas and woodlands of the Guinea zone in the south. Only a faint tinge of green marks the Sahel in the top part of the image. Vegetation becomes a deeper green farther to the south where annual rainfall is much more abundant.

The high-resolution image provided above has a spatial resolution of 500 meters per pixel. The MODIS Rapid Response System provides twice-daily images of northern Africa at additional resolutions via a clickable map.