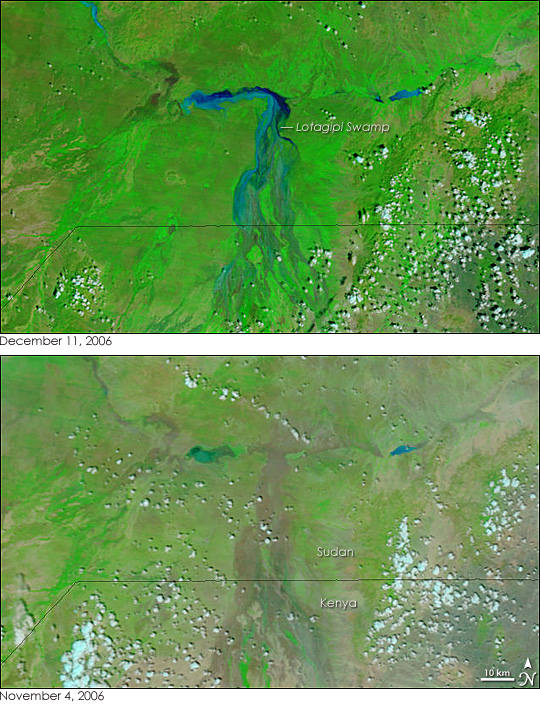 As the short rainy season in East Africa drew closer to its seasonal end, waters continued to rise on rivers and in wetlands throughout the region. Devastating floods swept through Somalia, Ethiopia, Kenya, and parts of surrounding countries starting at the end of October 2006 and continuing through December, as the short rainy season unleashed unusually heavy rains. According to the United States Agency for International Development, as many as 1.5 million people have been affected by floods in Kenya, Ethiopia, and Somalia. Though the rainy season typically ends in December, the rains were predicted to continue into January and possibly longer in some regions.

The Lotagipi Swamp, in northwestern Kenya and southern Sudan, brimmed with water when the Moderate Resolution Imaging Spectroradiometer (MODIS) on ’s Terra satellite captured the top image on December 11, 2006. The lower image was acquired a month earlier, when the swamp was relatively dry. Silty water, pale blue, streams through the swamp, with sections of deeper, clear water forming a dark blue boundary on the northern and eastern edges. The Lotagipi Swamp lies in the Ilemi Triangle, a segment of land that by treaty is in Sudan, but is administered by Kenya. The rain has turned the landscape a vibrant green with the growth of fresh vegetation. Patches of tan indicate areas where few or no plants are growing. Scattered clouds are pale blue and white in this image made from a combination of visible and infrared light. Photo-like, true-color images of the region are available from the MODIS Rapid Response Team twice daily.

Rainy Season Floods in the Sahel