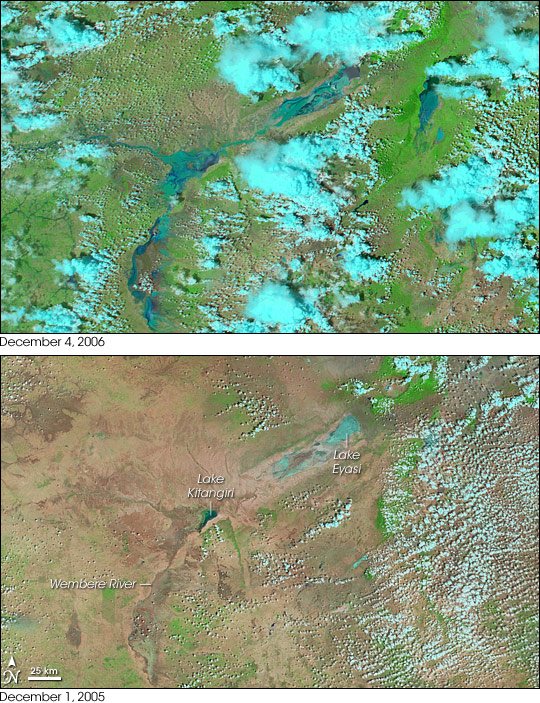 December typically marks the end of the short rainy season in eastern Africa. By mid- to late December, the rains subside until March, when the long rainy season begins. Fluctuations in the amount of rain that falls during the short rainy season are normal, and in 2006, the rains were more intense than normal. The heavy rains triggered deadly floods from Somalia to Tanzania. In 2005, by contrast, the rains failed, and drought ensued. The difference between the two years is clearly illustrated by this pair of satellite images, collected by the Moderate Resolution Imaging Spectroradiometer (MODIS) on NASA’s Aqua (top image) and Terra (lower image) satellites. The images were made with both visible and infrared light to highlight the presence of water of the ground. In this type of image, water is typically black or dark blue, but sediment can give it a lighter color. Clouds are turquoise, plant-covered land is bright green, and bare or sparsely vegetated ground is tan-pink.

The rain-induced floods of 2006 were visible in Tanzania on December 4, when MODIS captured the top image. In the image, Tanzania’s Wembere River and surrounding waterways are swollen to such an extent that the shores of Lake Kitangiri are swallowed in the floods. According to the United Nations Integrated Regional Information Networks, floods in this region and the area to its immediate north submerged at least five villages, affecting about 177 people and killing one. A year earlier, on December 1, 2005, the rivers were barely visible, and both Lake Eyasi and Lake Kitangiri were much smaller. In the drought conditions that prevailed in 2005, the land was bare, with little vegetation growing, and skies were relatively clear. The heavy rains that produced floods in 2006 also brought green to the landscape and left large clouds overhead.