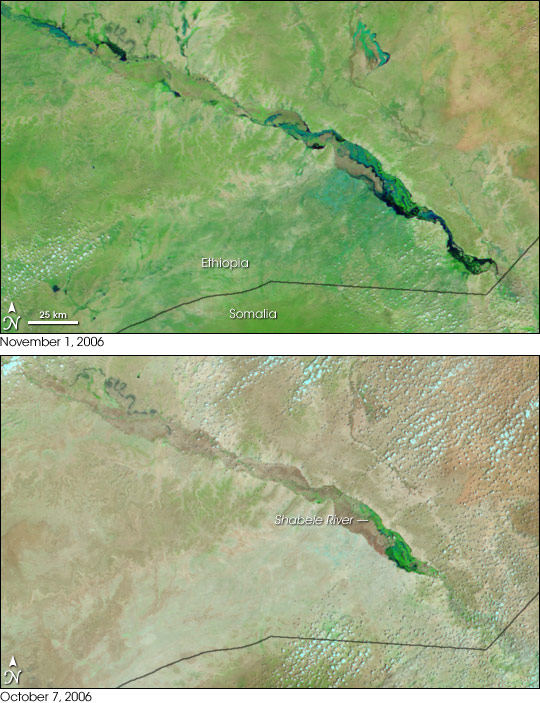 Severe drought early in 2006 followed by widespread flooding during August crippled Ethiopia. In late October and early November, the disaster continued to develop as heavy rain once again sent the Wabe Shebele River over its banks. The swollen river grew to twice its normal size, inundating towns that line its fertile banks, reported the World Food Program. More than 60 people died in the floods, and many more were impacted.

On November 1, 2006, skies cleared, providing the Moderate Resolution Imaging Spectroradiometer (MODIS) on NASA’s Terra satellite a clear view of the floods in southeastern Ethiopia. The Wabe Shabele spreads several kilometers across its flood plain, its water ranging from inky black to light blue. The scene is shown in infrared-enhanced false color to highlight the presence of water on the ground. In this color combination, made with both visible and infrared light, water is typically black, as it is in the lower reaches of the river in this image. Elsewhere in the scene, however, water is light blue because sediment in the water scatters light. The pale blue color blends with the light green of newly growing plants, making it difficult to tell just how extensive the floods are on the west bank of the river. Other waterways on either side of the Wabe Shabele are also filled with mud-laden, light blue water.

The lower image, taken on October 7, shows the Wabe Shabele under normal conditions. Though the river is prone to flooding, the attractiveness of living along its banks is clear from this image. Little vegetation is growing in the arid region except along the river’s banks, which are lined in green. Conditions changed by November 1. The same rainfall that caused the floods also spurred plant growth, and the landscape went from a barren tan-pink to verdant green. Lines of high clouds, pale blue and white in this false-color image, are scattered across both images.

Like much of East Africa, southeastern Ethiopia goes through a regular cycle of floods and droughts. The cycle is in part driven by El Niño, a cyclical warming of ocean waters in the central and eastern Pacific that can alter weather patterns around the world. In general, El Niño causes drought in some regions, such as Indonesia, Australia, and the Philippines, while bringing excess rain to others, including East Africa and the southwestern United States. In September 2006, NASA’s JASON satellite recorded a weak El Niño in the tropical Pacific Ocean. At the same time, drought was settling in over Australia, and heavy rain pounded East Africa.

Floods in Ethiopia and Somalia