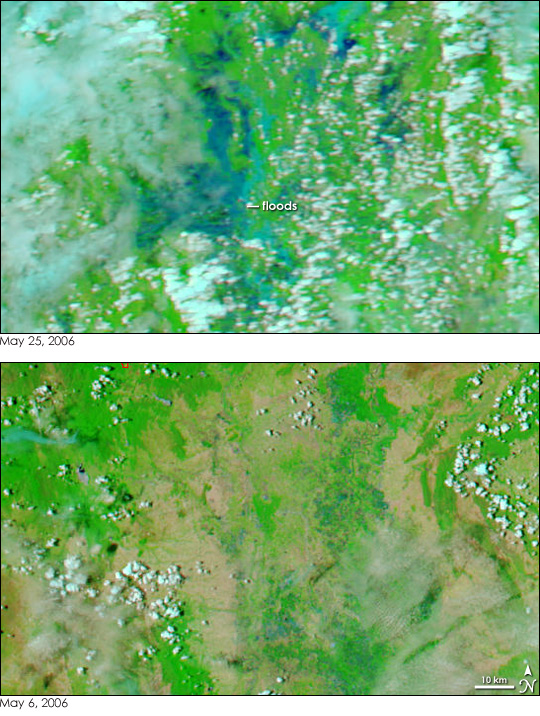 Heavy rains pounded northern Thailand starting on May 21, 2006, and by May 23, flash flooding, landslides, and overflowing rivers and reservoirs inundated 357 villages in five provinces, said the United Nations Office for the Coordination of Humanitarian Affairs (OCHA). On the afternoon of May 25, the clouds had cleared enough to give the Moderate Resolution Imaging Spectroradiometer (MODIS) on NASA’s Aqua satellite this view of the floods. The image uses observations of shortwave and near-infrared energy to make water stand out against the land. Normally, water is black or dark blue in this type of infrared image, but here it is lighter blue, colored with mud. Clouds are white and a lighter shade of blue. Plant-covered land is bright green, and bare earth is tan.

In the top image, the blue floods spread across tens of kilometers of what had been dry ground on May 6, lower image. Water levels had receded somewhat by May 25, when the top image was taken. According to OCHA, 30 people had been reported dead, 75 were missing, with 103,355 people affected by the flooding as of May 24.

The large images provided above show Thailand at a spatial resolution (level of detail) of 250 meters per pixel. Daily images of Southeast Asia are available from the MODIS Rapid Response Team in a variety of resolutions.