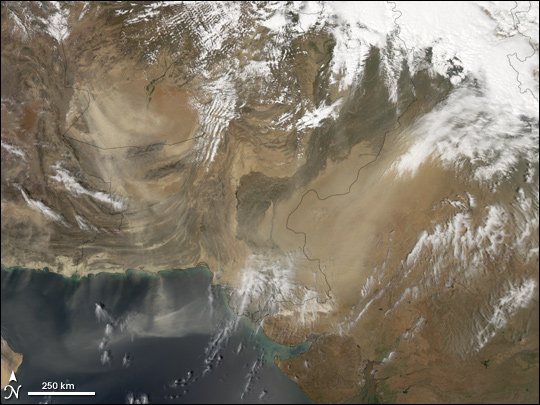 Dust blowing out of India, Pakistan, and Afghanistan mingled over the Arabian Sea on April 9, 2006. The Moderate Resolution Imaging Spectroradiometer (MODIS) on NASA’s Aqua satellite took this picture the same day.

In this image, a beige plume of dust, shown near the left edge of the picture, pushes southward from Afghanistan, crossing over Pakistan toward the ocean. To the east, another dust plume over the border between India and Pakistan also heads toward the water. Two tendrils of dust merge over the water, just south of the coast.

Dust Plumes over India and Pakistan

Dust plumes form semicircles and swirls along the border of India and Pakistan on May 25, 2009. The dust has likely arisen from a sand sea straddling the border.

Dust Blowing off the Coast of Pakistan