Phytoplankton and Hydrogen Sulfide off the Coast of Namibia 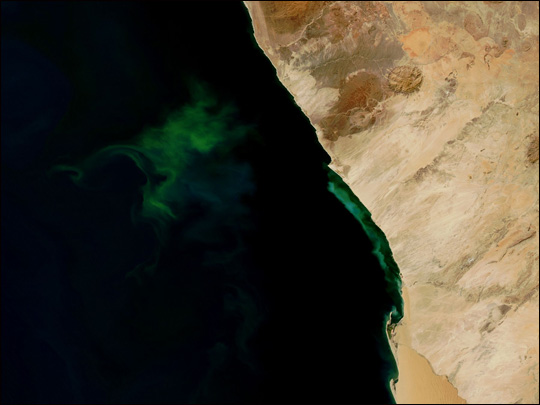 Like neon signs against a black night sky, phytoplankton and hydrogen sulfide form brilliant green streaks in the ocean water off the coast of Namibia in southern Africa. Though the two splashes of color are caused by different things, they are connected.

On the left, the cloud of green is formed by millions of microscopic plants growing on the surface of the ocean. In this part of the South Atlantic, deep, cold ocean water hits the coast of Africa and pushes to the surface. The cold water brings nutrients up from the ocean’s depths, and this feeds a thriving marine ecosystem. Among the life nourished here is phytoplankton, the microscopic ocean plants that color the water on the left side of this image. Nutrients are so rich that dense blooms of phytoplankton often form off the southwest coast of Africa.

As the plants die, they sink to the ocean floor. There, bacteria consume the plants, using up all of the oxygen in the water. Anaerobic bacteria that don’t require oxygen take over the decay process, releasing hydrogen sulfide gas as they work on the phytoplankton. The gas accumulates until it erupts to the surface. On its way up, it interacts with oxygen in the upper layers of the ocean and releases pure sulfur, a powdery yellow solid. The yellow sulfur gives the water near the shore its distinctive green tint. The eruptions are accompanied by a strong smell—sulfur smells like rotting eggs—and fish kills.

Hydrogen Sulfide Eruption Along the Coast of Namibia

Hydrogen Sulfide Eruptions Along the Coast of Namibia

People living along Namibia’s desert coast have long been familiar with the rotten-egg smell that periodically emanates from the Atlantic Ocean. With an economy that is largely based on fishing, the locals are also used to seeing millions of fish die whenever the unpleasant scent fills the air. The smell and the fish die-off are caused by hydrogen sulfide erupting from decaying plants on the sea floor. On May 12, 2004, the Moderate Resolution Imaging Spectroradiometer (MODIS) on NASA’s Terra satellite captured this image of a hydrogen sulfide eruption in progress.