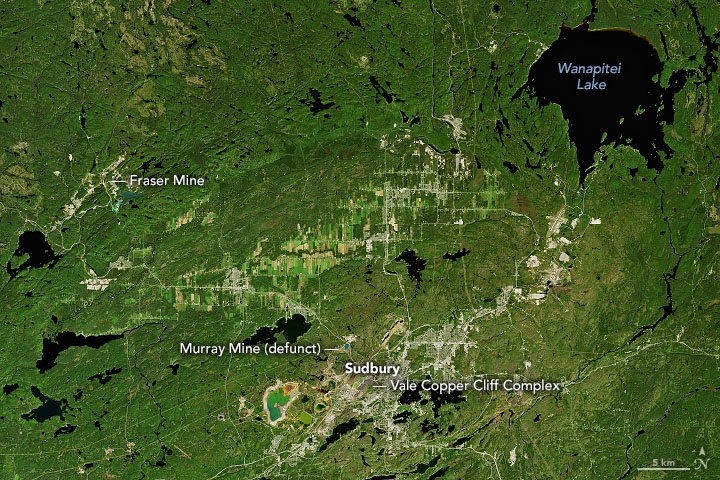 Numerous craters on Earth are exceptionally compelling when viewed from space, displaying clearly visible rims and well-defined bowls. Not Sudbury Basin. It can take a moment looking at images to discern the shape of this impact structure amid the modern landscape. But few craters are as large or as old.

The object responsible for creating Sudbury Basin crashed into Earth about 1.8 billion years ago. That makes this crater in Canada fifty times older than Popigai—one of the world’s most well-preserved craters—which was created a mere 36 million years ago. Much of Sudbury’s original crater, thought to have measured at least 200 kilometers (120 miles) across, has been deformed and eroded. Despite this, the crater has had a lasting impact on the region.

The Operational Land Imager (OLI) on Landsat 8 acquired this image of Sudbury Basin in southeastern Ontario on September 11, 2020. Notice the many mines located around the basin, particularly along the rim. This is due to the abundance of ore deposits rich in nickel and copper, which were discovered here long before people were aware of the basin’s cosmic origin.

The relief of the basin is apparent in the map below. Data for the map comes from a digital elevation model acquired by the Shuttle Radar Topography Mission (SRTM). 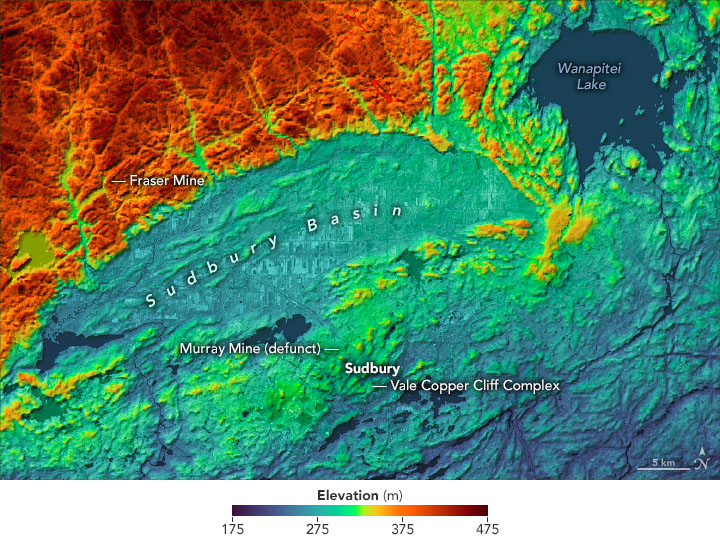 This region of Canada owes its unique geology to that powerful collision—initially thought to be an asteroid and later interpreted as a comet. The collision punctured Earth’s crust, allowing material from the mantle to well up from below and fill the basin with melted rock. Then after a shockwave shattered the surrounding rocks, minerals from the melted rock below infiltrated the cracks.

People have been making use of the minerals in Sudbury Basin for thousands of years. Large-scale mining operations started with the Murray Mine (now defunct) in the late 1800s. The mining took a toll on the landscape, polluting the region with sulfur dioxide and metals released during smelting processes. In recent decades, efforts have been made to capture emissions and restore the health of the basin’s land and water.

Few craters are as large, or as old, as this impact structure in southeastern Ontario, Canada.

Astronauts capture the first confirmed image of the structure taken from the International Space Station.

This geologic feature has captured the attention of astronauts for about as long as NASA has sent humans into orbit around Earth.