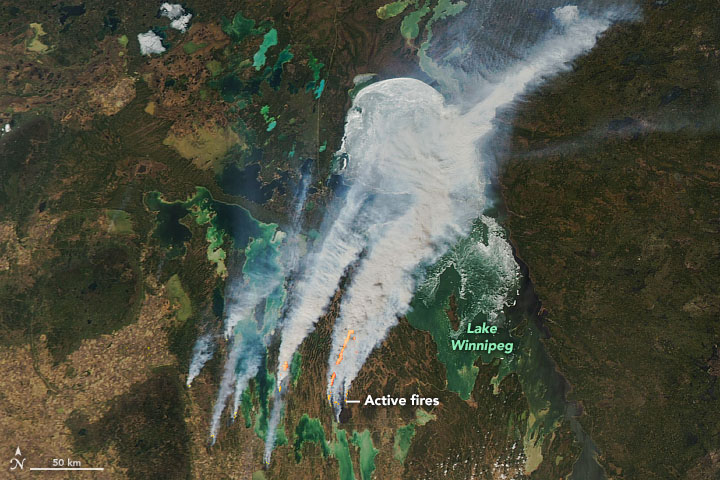 On May 7 and May 14, 2021, winter ice still covered most of Lake Winnipeg and the smaller lakes nearby, and walleye were starting to show up on fishing hooks. By May 19, most of the ice was gone, temperatures hovered between 30° and 33° Celsius (86° to 91° Fahrenheit), and the parched landscape was blanketed with smoke and fire. It seemed like Canada’s Manitoba Province had jumped right from winter to summer.

Much of southern Manitoba and Saskatchewan had abnormally dry autumn, winter, and spring weather, so much of the region is now in severe to extreme drought. John Pomeroy, a water resources researcher at the University of Saskatchewan, told CBC News that soil moisture is about 40 percent of normal. The western United States and much of Mexico are enduring similar conditions.

Following a record-breaking spring heatwave and several days of gusty winds, Environment Canada declared fire danger to be “extremely high” in southern and central Manitoba. Provincial and regional governments have banned campfires in parks and closed many hiking and biking trails. Leaders of the Misipawstik Cree and Lake St. Martin First Nations encouraged residents to evacuate some areas due to encroaching fires, and several homes were destroyed. Parts of highways 5, 6, and 307 in Manitoba were shut down due to smoke.

A combination of winds and thawing ice created an ice shove on Dauphin Lake that damaged numerous homes.

People and satellites keep an eye on when ice on the world’s deepest lake melts each year.

Summer beachgoers and fishers have been getting a wintery surprise on Lake Superior.