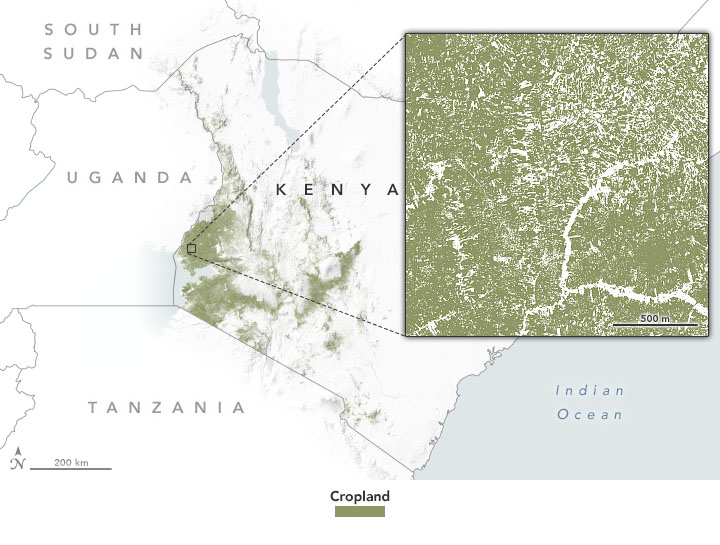 Nearly 75 percent of Kenya’s people rely on farming for their food and income, so environmental issues like drought, locusts, and climate change can put many lives and livelihoods at risk. Crop insurance programs can help mitigate those risks, but it is not always easy to know where resources are needed. Now NASA-funded scientists are working with colleagues in Kenya to make better assessments of agricultural needs through the use of satellite data.

In the first few years of the country’s crop insurance program, Kenyan agriculture agents collected much of their information through in-person visits, traveling to individual farms to determine how crops were performing and if financial assistance was necessary. It was labor-intensive and time-consuming. Officials urgently needed timely information spanning vast areas of the country—and that is where NASA Earth observations came in.

“We suggested that instead of looking for farmers, we look at fields by using products derived from NASA satellite data,” said Catherine Nakalembe, a geographical scientist at the University of Maryland and a leader of the Africa section of the NASA-funded Harvest program. By adding satellite observations into their models and calculations, managers of Kenya’s agricultural insurance program could more readily assess critical information necessary to help farmers.

Supported by the USAID-NASA SERVIR program and Harvest, researchers worked with the Regional Center for Mapping of Resources for Development (RCMRD) to incorporate satellite data on rainfall, soil moisture, and land use into tools that can inform Kenya’s agriculture monitoring programs. A key part was an effort to assess crop conditions from afar by using a technique called “cropland masks.” These mapping tools use computer analyses of satellite images and data to build highly localized views of where crops are growing and the health of those fields. The Kenyan ministry and researchers in the RCMRD can then confirm the satellite data by sampling crop conditions on the ground.

The map at the top of this page is a cropland mask for Kenya in 2019. It uses data from Europe's Sentinel-2 satellite to show where crops were growing at the time. Such data are used in the Kenya crop monitor and will be incorporated into the insurance program, allowing the Ministry of Agriculture to better focus time and money. Agriculture officials estimated that the increase in efficiency has already saved 70 percent in costs and staff time. Those savings, in part, helped the program reach 425,000 farmers in 2019, compared to just 30,000 in 2015.

If project plans come to fruition, the cropland masks will eventually inform efforts like the Crop Conditions Bulletin, released monthly by the Kenyan Ministry of Agriculture. Researchers currently produce broad national maps indicating where conditions are favorable or unfavorable for specific crops such as maize. With such data, agriculture ministers can more quickly discern where to focus their evaluation and monitoring efforts. 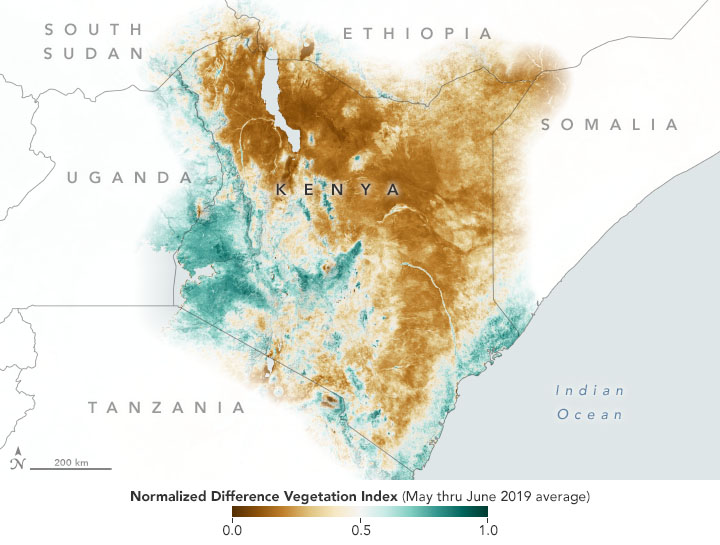 For instance, scientists use satellites to assess the “greenness” of ground cover in Kenya, a measurement known as the Normalized Difference Vegetation Index (available in 8- and 16-day intervals from the MODIS instruments on NASA’s Terra and Aqua satellites). That data can show where crops, forests, and other plants are vibrant and thriving or where drought may have damaged crucial yields. The map above shows NDVI averages for the region from May through June 2019.

If cropland masks and other landscape measurements like NDVI can be merged, then agriculture ministers will be able to see from their offices not only where the farms are, but which ones might be thriving or hurting. The Kenyan ministry could spend more energy providing crop insurance aid to the right farmers, instead of just finding them.

Editor’s note: SERVIR is a joint venture between the U.S. Agency for International Development (USAID) and NASA’s Earth Applied Sciences Program. Named for the Spanish and French word “to serve,” SERVIR provides Earth observations and research to help developing countries address critical challenges in food security and other environmental issues. NASA Harvest is an applied sciences program with the mission of enabling and advancing the adoption of satellite Earth observations by public and private organizations to benefit food security, agriculture, and human and environmental resiliency in the US and worldwide. This consortium of scientists and agricultural stakeholders is led by the University of Maryland.

Cropland masks and other environmental data can help agriculture agencies pinpoint where support is most needed. 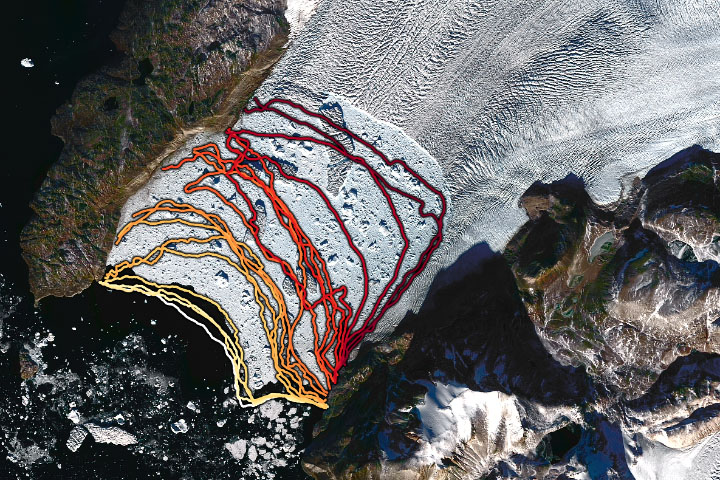 A quarter of the cut flowers sold in Europe are grown in Kenya. Straddling the equator, Kenya gets steady sunlight dealt out in days that vary little in length. It’s the perfect climate for flowers year-round. The center of Kenya’s flower industry is Lake Naivasha.