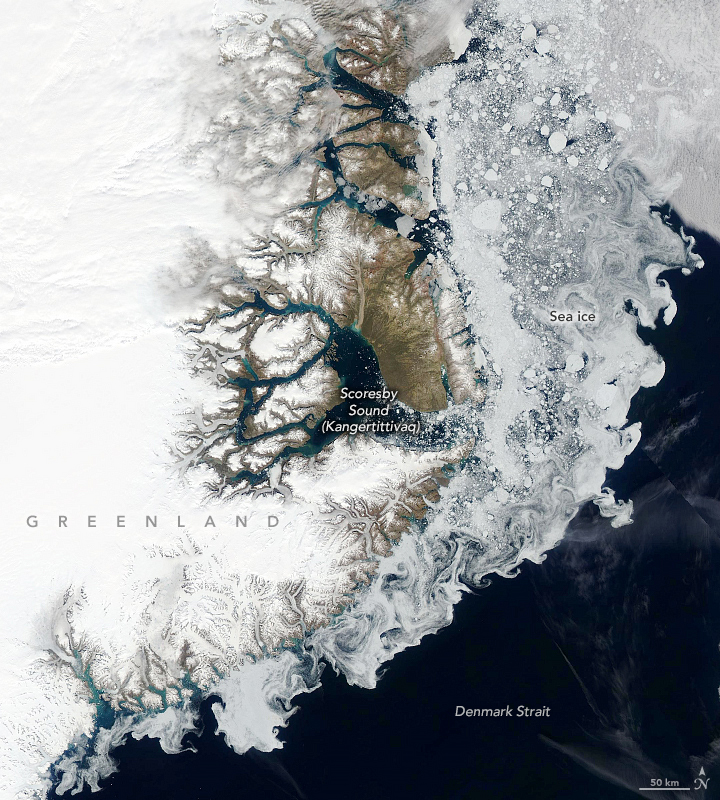 Arctic sea ice is subject to some serious travel restrictions. Penned in by major land masses, most ice that forms in the Arctic Ocean stays there for the duration of its existence—typically one to four years before melting. Some ice, however, escapes the Arctic Ocean through a handful of passages and then drifts south.

That’s the origin of the sea ice pictured here. When satellites acquired these images in July 2020, the ice had drifted more than 1,000 kilometers (600 miles) from the Arctic Ocean. The wide view above, acquired on July 2 with the Moderate Resolution Imaging Spectroradiometer (MODIS) on NASA’s Aqua satellite, shows sea ice hugging the coast of East Greenland. The detailed image below, acquired July 3 with the Operational Land Imager (OLI) on Landsat 8, shows ice south of the Scoresby Sound (Kangertittivaq) fjord system along the Denmark Strait. 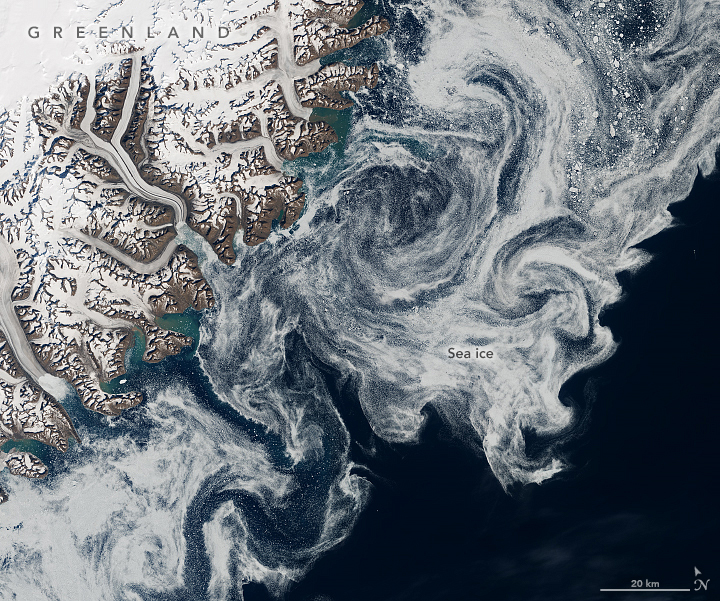 “The pack-ice you see in the image is remnant ice that exited the Arctic through Fram Strait,” wrote Robert Pickart, a high-latitude oceanographer at Woods Hole Oceanographic Institution. “It is in the process of melting out as it is carried southward by the East Greenland Current.”

Pickart, who was sailing on the R/V Armstrong near the southern tip of Greenland at the time of this interview, noted that the current is unstable and tends to meander. The instability causes vortices of water, or “eddies,” to propagate offshore, which can deform the seaward edge of the sea ice.

“This is a graphic example of how fresh water—both liquid and frozen—originating from the Arctic gets transferred to the interior of the Nordic seas, which modulates the wintertime transformation of the interior water,” Pickart said. “If this changes in the future, it has implications for the global overturning circulation that helps regulate our climate.”

Ice that originated in the Arctic Ocean drifts hundreds of miles south, pulled along and shaped by the East Greenland Current.

Breakdown of an Ice Arch

An arch of pack ice usually prevents Arctic sea ice from flowing down the Nares Strait. That arch broke up early this year.

Summer is a dynamic time for ice in Arctic waters—melting, drifting, and even forming occasionally.