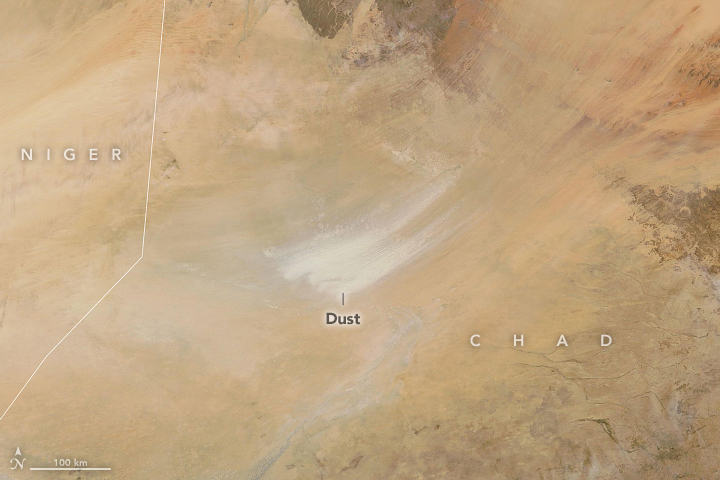 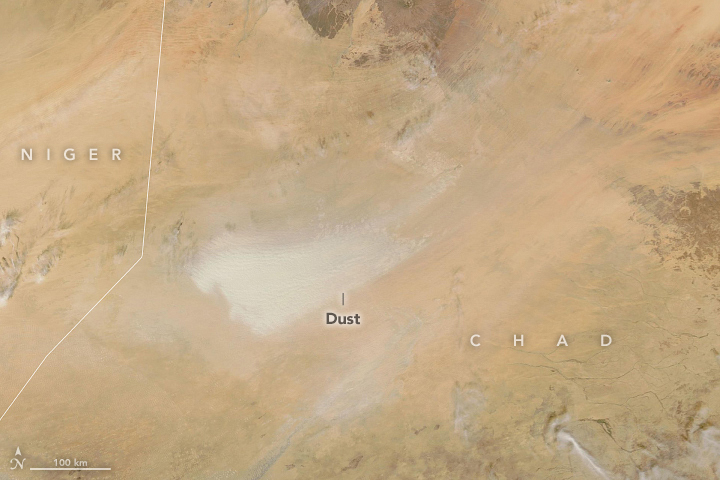 About 7,000 years ago, the Bodélé Depression was the northernmost part of Lake Megachad, a massive body of water in north-central Africa that spanned an area larger than all the Great Lakes combined. Geologists think it was the world’s largest lake at the time.

Today, the sandy depression and former lake bed is among the world’s most prolific sources of atmospheric dust. According to one estimate, it generates about half of the mineral dust that leaves the Sahara Desert.

Mountain ranges to the northeast of the depression create a natural wind tunnel that focuses and strengthens winds as they rake across fast-moving sand dunes. The dunes are comprised mainly of bits of diatomite, a light-colored sedimentary rock formed from the skeletal remains of diatoms. These common, single-celled algae live in water and are encased by distinctive silica-rich cell walls.

On December 12, 2019, the Moderate Resolution Imaging Spectroradiometer (MODIS) on NASA’s Terra and Aqua satellites acquired these images of dust streaming from the depression. In the three hours between the images, northeasterly winds picked up strength and extended the plume.

Dust transport from the Bodélé Depression follows a semiannual cycle, with peaks in dust storms in the fall and spring. There is also a daily cycle, with the strongest winds typically blowing more dust in the morning and weaker winds blowing less dust at night.

The dried-up lake bed in Chad is a major source of atmospheric dust.

Image of the Day Land Dust and Haze Remote Sensing

The world’s largest non-polar desert is also the leading source of atmospheric dust.

Dust in the Bodele Depression