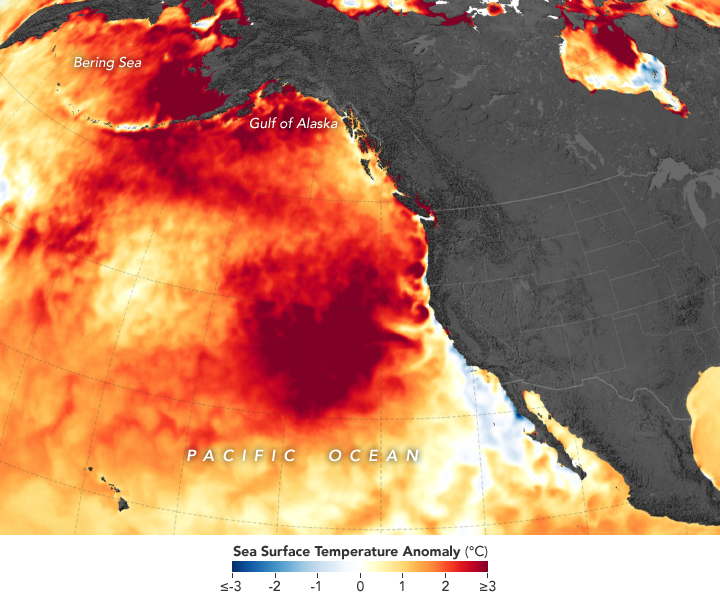 From 2014-2016, a marine heat wave spread across the northeastern Pacific Ocean—an ocean weather event that researchers coined “the blob.” In the summer of 2019, an expanse of warm surface water returned to the region.

The unusual conditions are visible in the maps above and below, which shows sea surface temperature anomalies across the northeastern Pacific in August 2019. Red colors depict areas that were hotter than average for the same month from 1985-2012; blues were colder than average. Data for the map were compiled by Coral Reef Watch, blending observations from the Suomi NPP, MTSAT, Meteosat, POES, Terra, Aqua, and GOES satellites with computer models.

According to Nicholas Bond, Washington’s state climatologist and a research meteorologist at the University of Washington, the warm surface water in August 2019 was caused by an unusual and persistent weather pattern. An atmospheric ridge of high pressure set up off the coast of North America, extending from the Bering Sea to the Pacific Northwest. High pressure systems bring gentle winds—not nearly strong enough to stir the ocean and cause the rise of deeper cold water. There may have been less cloud cover than normal, as well as anomalous poleward currents in the upper ocean that bring warm water north.

The result was a marine heat wave rivaling the magnitude and extent of the 2014-2016 event. Still, Bond noted: “It remains to be seen if it will approach that of 2014-16 in terms of how long it lasts, how deep it reaches, and its impacts.”

The unusually warm water could have effects across aquatic ecosystems and regional fisheries. Salmon, for example, rely on favorable cool-water conditions in both fresh- and marine-water environments. Warm river water could mean trouble for juvenile salmon and for spawning adults in their freshwater phase of life. Warm water offshore usually means poor feeding conditions for young salmon as they leave freshwater streams and enter the marine environment for the first time.

“I would not be surprised if the class of salmon that went to sea this year have relatively low survival rates,” Bond said. “Many of us in the climate and fisheries-oceanography community along the West Coast and in Alaska are watching what is happening with great interest—and at least some trepidation.”

Climate models used for seasonal weather prediction show the warmth in the upper ocean continuing into spring 2020, but moderating somewhat. “Here’s hoping that is the case,” Bond said, “since the marine ecosystem is still recovering from the 2014-16 event.”

The warm surface water this summer was caused by an unusual and persistent weather pattern.

The Demise of the Warm Blob

After changing regional weather patterns and taking a bite out of sea life, an unusually persistent patch of warm water in the northeastern Pacific has chilled out.

The near-record water temperatures of 2015-16 has been followed by a modest, quiet appearance of La Niña.

These images show that the central and eastern Pacific Ocean was unusually cold in December 2010, a tell-tale sign of La Niña. The associated rainfall map shows that La Niña was impacting weather in parts of the globe.