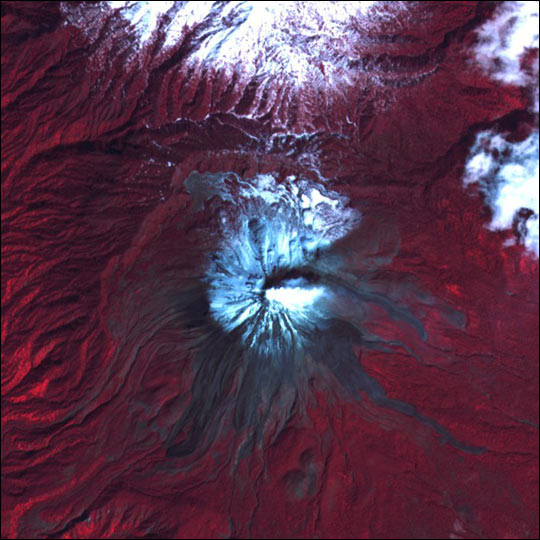 The Colima Volcano part of a complex of volcanoes that forms the center of the Western Mexico Volcanic Belt. Rising 3,850 meters above the forested valley around the Nevado National Park, Colima is one of Mexico’s most active volcanoes. Most recently, on September 28, 2004, a new lava dome began to rise from Colima’s summit crater. By September 30, block and ash flows—an avalanche of hot volcanic rock—began streaming down the mountain, and lava bubbled out starting on October 1. The eruption had not stopped by October 5, when the Smithsonian Global Volcanism Program released their most recent report.

The current eruption is a continuation of a longer eruptive phase. From February 2002 to February 2003, the volcano erupted almost continuously and has burst forth with several smaller eruptions since that time.

In one of Colima’s quieter moments, on January 17, 2004, the Advanced Spaceborne Thermal Emission and Reflection Radiometer (ASTER) aboard NASA’s Terra satellite captured the above false-color image (Bands 3-2-1). The large snow-covered mountain to the north is Nevado de Colima. This older edifice dwarfs the younger and historically active Colima volcano to the south, shown here with a minor steam plume. Several lava flows from previous eruptions can be seen emanating from the Colima volcano summit area.

ASTER is not the only instrument that has proven useful in monitoring volcanoes from space. The Moderate Resolution Imaging Spectroradiometer (MODIS) on NASA’s Terra and Aqua satellites detects thermal anomalies like volcanic hotspots and fires. MODIS data are entered into the MODVOLC system, which automatically calculates the heat output from the volcano. This plot shows the 2002-2003 eruptive phase as well as later sporadic events. The first alert occurred on February 16, 2002, roughly coincident with the appearance of new lava on February 14, 2002, and the last alert of the main 2002-2003 eruptive phase was on January 25, 2003, when lava effusion was beginning to diminish. Alerts in August through December 2003, and one in February 2004, represent the periodic explosive activity that has followed the 2002-2003 lava effusion at Colima. The alert dated August 29, 2003, was acquired within hours of a large explosion on August 28, which produced a series of pyroclastic flows down Colima’s flanks.

To read more about the use of MODIS to monitor volcanoes, please read Sensing Remote Volcanoes.

The Nicaraguan volcano erupted for the first time in more than a century.

In early September 2007, Tanzania&#rsquo;s Ol Doinyo Lengai Volcano erupted, sending a cloud of ash into the atmosphere. The volcanic plume appears pale blue-gray, distinct near the summit, and growing more diffuse to the south. The charcoal-colored stains on the volcano’s flanks appear to be lava, but they are actually burn scars left behind by fires that were spawned by fast-flowing, narrow rivers of lava ejected by the volcano.