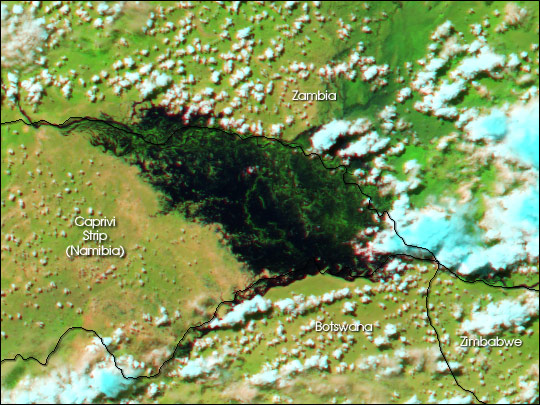 Heavy rains through the month of March have pushed a section of Africa’s Zambezi River to its highest level since 1958. Just as the mighty river turns east in its path to the Indian Ocean, and immediately before it thunders over the Victoria Falls, it passes through the low-lying plains of Namibia’s Caprivi Strip. This section of the river floods often as the wet-season rains fill the river. This year, the floods have come earlier than normal, and are rising to levels not seen in nearly 50 years.

The Namibian government expects to evacuate 40,000 to 50,000 people from the region as the flood waters continue to rise, though only 20,000 have been affected as of April 1. In comparison, last year’s floods, which at the time were declared the worst the region had seen since 1958, forced 12,000 people from their homes. On March 31, 2004, the waters reached 6.89 meters, surpassing the peak of last year’s flood, 6.64 meters. So far, two people have died in this year’s floods.

The Moderate Resolution Imaging Spectroradiometer (MODIS) on the Aqua satellite captured this view of the flood in the Caprivi Strip on March 30, 2004. The false color image shows the flood water in an inky black in sharp contrast to the bright green vegetation. Bare ground is tan and clouds are light blue. The image is available in true-color and additional resolutions.

The Zambezi River forms at a spring in northern Zambia, and flows south through Zambia and Angola before turning east in Namibia’s Caprivi Strip and flowing through Zimbabwe, Zambia, and Mozambique to the Indian Ocean. It is Africa’s fourth largest river system after the Nile, Zaire, and Niger Rivers. The high-resolution image also shows floods along the northern section of the river in Zambia at MODIS maximum resolution of 250 meters per pixel.

Every year as the rainy season draws to a close, the Zambezi River pushes over its banks along its upper reaches in Zambia, but this year, the river is fuller than normal.