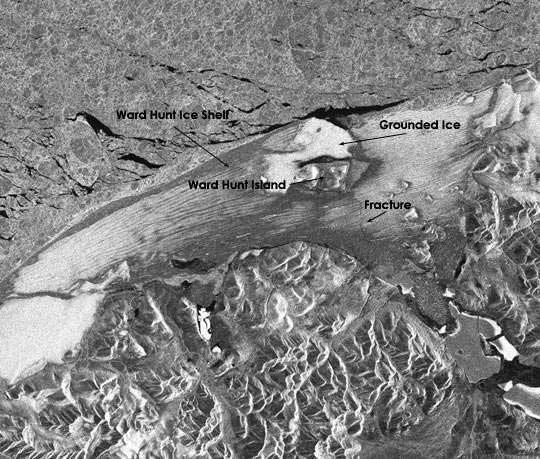 The Arcticï¿½s largest ice shelf is breaking up. The Ward Hunt Ice Shelf is a remnant of the compacted snow and ancient sea ice that extended along the northern shores of Ellesmere Island in Northern Canada until the early twentieth century. Rising temperatures have reduced the original shelf into a number of smaller shelves, the largest of which was the Ward Hunt Ice Shelf on the northwest fringe of the island.

The Ward Hunt Ice Shelf encompasses Ward Hunt Island and covers the mouth of the Disraeli Fiord. Until recently, fresh melt water formed a 43-meter deep lake on top of almost 400 meters of seawater in the fiord. Called an epishelf lake, the relatively fresh water dammed by the 3000-year-old ice shelf became the basis of a rare ecosystem. Disraeli Fiord was the largest remaining epishelf lake in the Northern Hemisphere.

Between 2000 and 2002, the Ward Hunt Ice Shelf began to crack and eventually broke in two, allowing the lake behind it to drain rapidly into the Arctic Ocean. Derek Mueller and Warwick Vincent, of the Centre dï¿½ï¿½tudes nordiques at Universitï¿½ Laval in Quebec, Canada and Martin Jeffries of the Geophysical Institute at the University of Alaska Fairbanks in Fairbanks, Alaska described the event in a paper published in Geophysical Research Letters on October 18, 2003.

This Standard Beam Mode RADARSAT-1 image clearly shows a large crack dividing the ice shelf in half. The crack runs from the Arctic Sea to the right of Ward Hunt Island and the bright white ice grounded there and back to the rougher, mountainous region. The image, acquired September 27, 2003, has a resolution of 25 meters.