The Coast is the Place to Be

“NASA is on the coast because that’s the right place to launch from,” said Kim Toufectis, a facilities planner in NASA’s Office of Strategic Infrastructure.

The U.S. government long ago made the choice to fly most of its rockets and experimental aircraft from the coast because failures happen, and they are less dangerous to the public when they happen over water than over land. But launching from the coast requires testing, storage, and spacecraft assembly facilities to be nearby. So if you are going into space from the United States, you are going to have to face down the challenge of rising seas. 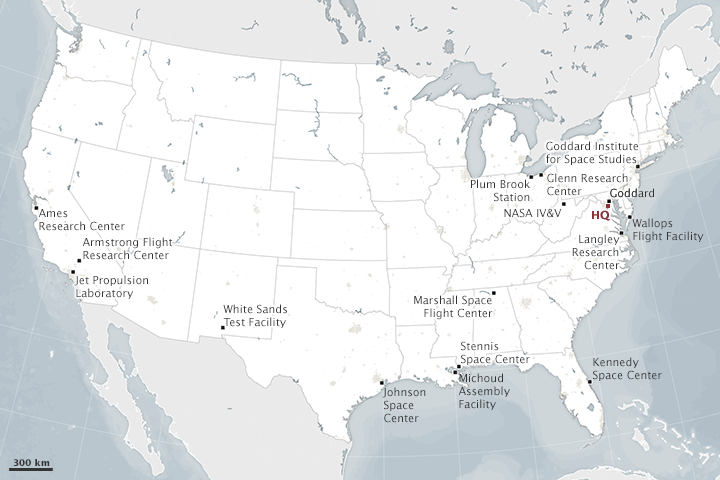 The majority of NASA centers and facilities are on or very near the coast. (NASA Earth Observatory map by Joshua Stevens. Explore the interactive version on NASA’s location page)

As at Kennedy, the launch pads and buildings at Wallops Flight Facility stand just a few hundred feet from the Atlantic Ocean. Langley Research Center is situated along the Back River, near the mouth of Chesapeake Bay. Ames Research Center is tucked into the south end of San Francisco Bay. Johnson Space Center sits on Clear Lake, an inlet off of Galveston Bay. Those centers all stand between 5 and 40 feet (2 and 12 meters) above mean sea level. The math is nearly upside down at Michoud Assembly Facility, which sits behind levees near the Mississippi River and Lake Pontchartrain.

Sea level rise of between 13 and 69 centimeters by the 2050s is projected for NASA’s five coastal centers and facilities…Even under lower sea level rise scenarios, the coastal flood event that currently occurs on average once every 10 years is projected to occur approximately 50 percent more often by the 2050s in the Galveston/Johnson Space Center area; 2 to 3 times as often near Langley Research Center and Kennedy Space Center; and 10 times more frequently in the San Francisco Bay/Ames Research Center area. NASA coastal centers that are already at risk of flooding are virtually certain to become more vulnerable in the future. 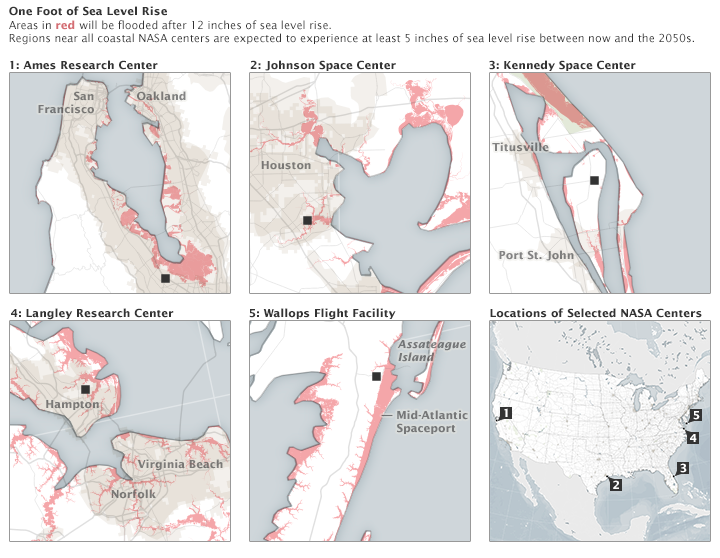 If you think about the height of the sea surface like the height of the water in a calm bathtub, then a rise of a few tens of centimeters over a few decades doesn’t sound like much. But sea level doesn’t rise evenly; it piles up more in some places because of natural wind and current patterns. And turbulence matters: Think about that bathtub with a child sloshing around in it. Waves can roll up one side and then the other, sometimes splashing over the brim. The higher the flat-water line, the greater the chance that the water will slosh out of the basin when it is stirred up by storms and winds.

Sea level also matters in a horizontal direction. An old rule of thumb is that 1 inch of vertical change in sea level translates into 100 inches of horizontal beach loss on a flat beach or marsh. In this way, a little bit of sea level rise can translate into a lot of water moving inland with storms or abnormally high tides.

“Sea level is important because it gradually moves the high-tide line farther up the beach and closer to buildable land,” said John Jaeger, a coastal geologist from the University of Florida. “It also allows storm surges to penetrate farther inland.”