How Will Global Warming Change Earth?

The impact of increased surface temperatures is significant in itself. But global warming will have additional, far-reaching effects on the planet. Warming modifies rainfall patterns, amplifies coastal erosion, lengthens the growing season in some regions, melts ice caps and glaciers, and alters the ranges of some infectious diseases. Some of these changes are already occurring. 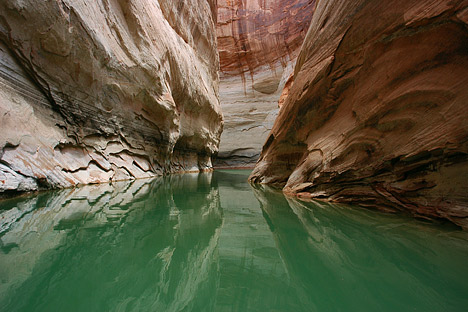 Global warming will shift major climate patterns, possibly prolonging and intensifying the current drought in the U.S. Southwest. The white ring of bleached rock on the once-red cliffs that hold Lake Powell indicate the drop in water level over the past decade—the result of repeated winters with low snowfall. (Photograph ©2006 Tigresblanco.)

For most places, global warming will result in more frequent hot days and fewer cool days, with the greatest warming occurring over land. Longer, more intense heat waves will become more common. Storms, floods, and droughts will generally be more severe as precipitation patterns change. Hurricanes may increase in intensity due to warmer ocean surface temperatures. 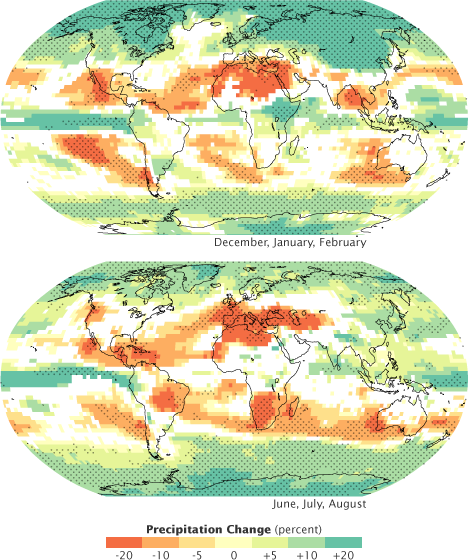 Apart from driving temperatures up, global warming is likely to cause bigger, more destructive storms, leading to an overall increase in precipitation. With some exceptions, the tropics will likely receive less rain (orange) as the planet warms, while the polar regions will receive more precipitation (green). White areas indicate that fewer than two-thirds of the climate models agreed on how precipitation will change. Stippled areas reveal where more than 90 percent of the models agreed. (©2007 IPCC WG1 AR-4.)

It is impossible to pin any single unusual weather event on global warming, but emerging evidence suggests that global warming is already influencing the weather. Heat waves, droughts, and intense rain events have increased in frequency during the last 50 years, and human-induced global warming more likely than not contributed to the trend.

The weather isn’t the only thing global warming will impact: rising sea levels will erode coasts and cause more frequent coastal flooding. Some island nations will disappear. The problem is serious because up to 10 percent of the world’s population lives in vulnerable areas less than 10 meters (about 30 feet) above sea level.

Sea levels crept up about 20 centimeters (7.9 inches) during the twentieth century. Sea levels are predicted to go up between 18 and 59 cm (7.1 and 23 inches) over the next century, though the increase could be greater if ice sheets in Greenland and Antarctica melt more quickly than predicted. Higher sea levels will erode coastlines and cause more frequent flooding. (Graph ©2007 Robert Rohde.)

The Intergovernmental Panel on Climate Change (IPCC) estimates that sea levels will rise between 0.18 and 0.59 meters (0.59 to 1.9 feet) by 2099 as warming sea water expands, and mountain and polar glaciers melt. These sea level change predictions may be underestimates, however, because they do not account for any increases in the rate at which the world’s major ice sheets are melting. As temperatures rise, ice will melt more quickly. Satellite measurements reveal that the Greenland and West Antarctic ice sheets are shedding about 125 billion tons of ice per year—enough to raise sea levels by 0.35 millimeters (0.01 inches) per year. If the melting accelerates, the increase in sea level could be significantly higher.

More importantly, perhaps, global warming is already putting pressure on ecosystems, the plants and animals that co-exist in a particular climate zone, both on land and in the ocean. Warmer temperatures have already shifted the growing season in many parts of the globe. The growing season in parts of the Northern Hemisphere became two weeks longer in the second half of the 20th century. Spring is coming earlier in both hemispheres.

This change in the growing season affects the broader ecosystem. Migrating animals have to start seeking food sources earlier. The shift in seasons may already be causing the lifecycles of pollinators, like bees, to be out of synch with flowering plants and trees. This mismatch can limit the ability of both pollinators and plants to survive and reproduce, which would reduce food availability throughout the food chain.

See Buzzing About Climate Change to read more about how the lifecycle of bees is synched with flowering plants.

In some ecosystems, maximum daily temperatures might climb beyond the tolerance of indigenous plant or animal. To survive the extreme temperatures, both marine and land-based plants and animals have started to migrate towards the poles. Those species, and in some cases, entire ecosystems, that cannot quickly migrate or adapt, face extinction. The IPCC estimates that 20-30 percent of plant and animal species will be at risk of extinction if temperatures climb more than 1.5° to 2.5°C.

The changes to weather and ecosystems will also affect people more directly. Hardest hit will be those living in low-lying coastal areas, and residents of poorer countries who do not have the resources to adapt to changes in temperature extremes and water resources. As tropical temperature zones expand, the reach of some infectious diseases, such as malaria, will change. More intense rains and hurricanes and rising sea levels will lead to more severe flooding and potential loss of property and life. 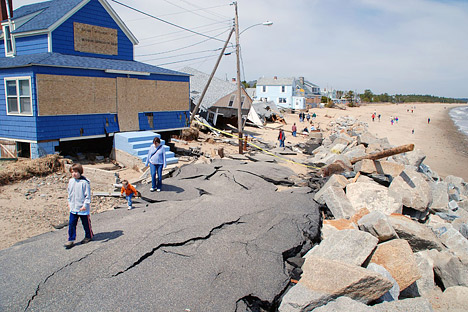 One inevitable consequence of global warming is sea-level rise. In the face of higher sea levels and more intense storms, coastal communities face greater risk of rapid beach erosion from destructive storms like the intense nor’easter of April 2007 that caused this damage. (Photograph ©2007 metimbers2000.)

Hotter summers and more frequent fires will lead to more cases of heat stroke and deaths, and to higher levels of near-surface ozone and smoke, which would cause more ‘code red’ air quality days. Intense droughts can lead to an increase in malnutrition. On a longer time scale, fresh water will become scarcer, especially during the summer, as mountain glaciers disappear, particularly in Asia and parts of North America.

On the flip side, there could be “winners” in a few places. For example, as long as the rise in global average temperature stays below 3 degrees Celsius, some models predict that global food production could increase because of the longer growing season at mid- to high-latitudes, provided adequate water resources are available. The same small change in temperature, however, would reduce food production at lower latitudes, where many countries already face food shortages. On balance, most research suggests that the negative impacts of a changing climate far outweigh the positive impacts. Current civilization—agriculture and population distribution—has developed based on the current climate. The more the climate changes, and the more rapidly it changes, the greater the cost of adaptation.

Ultimately, global warming will impact life on Earth in many ways, but the extent of the change is largely up to us. Scientists have shown that human emissions of greenhouse gases are pushing global temperatures up, and many aspects of climate are responding to the warming in the way that scientists predicted they would. This offers hope. Since people are causing global warming, people can mitigate global warming, if they act in time. Greenhouse gases are long-lived, so the planet will continue to warm and changes will continue to happen far into the future, but the degree to which global warming changes life on Earth depends on our decisions now.

Introduction
Global Warming
How is Today’s Warming Different from the Past?
Is Current Warming Natural?
How Much More Will Earth Warm?
How Will Global Warming Change Earth?
References and Related Resources

Introduction
Global Warming
How is Today’s Warming Different from the Past?
Is Current Warming Natural?
How Much More Will Earth Warm?
How Will Global Warming Change Earth?
References and Related Resources